I'm trying for over 2 days now to create toggle button that in pressed state like the above image, but that upper border is giving me a headache. Does anyone have any idea how to create that round corner that goes down? The background is a linear gradient top to bottom: #b8c7d6 - #a8b3c4

I have something like this but it is far from the design:

Here's what worked well for me. I found that the rounded corners added some additional challenges with creating the top area shadow correctly, but I was able to get that working by combining several techniques.

Al first technique involves the clever use of two Borders. The outer border has its ClipToBounds set to true, and the inner Border has a DropShadowEffect, con ShadowDepth set to 0 and a BlurRadius of around 5. This gets us part of what we need, but it won't handle the rounded corner issue (we'll get to that). This technique can be found at este artículo. Here's the gist of it:

If I recall correctly, at this point we would have something close to what you want, except that the DropShadowEffect "bleeds" out of the rounded corners (again we'll address that soon).

Another problem we would now have is that any child elements that we place inside the inner Border would also have the DropShadowEffect applied to them! To correct that problem, we need the second technique. Place the two Borders, along with another container (to hold your content) into a Grid, so that the outer Border and the new container are siblings. This will cause the siblings to overlap each other, while only applying the DropShadowEffect de las personas acusadas injustamente llamadas Border. Ver esta respuesta.

Now to address the "bleed" issue, where the DropShadowEffect does not follow the contour of the rounded corners, but rather acts as if the corners were straight. This requires the third technique. Necesitamos usar Michah's ClippingBorder custom control. We need to replace the above-mentioned outer Border control with his ClippingBorder, todavía guardando ClipToBounds set to true. This will trim off the bleed at the rounded corners.

fui capaz de combine these three techniques to create a "sunk in" (or "inset") border look. It looked something like:

Notice that the upper "glow" (DropShadowEffect) nicely follows the contour of the rounded corner of the Border: 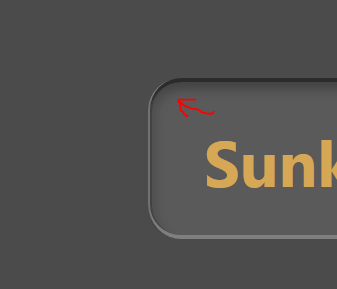 I would use two borders: the outer would look something like:

The inner would create the shadow effect as follows:

Obviously you'll need to tweak the values, but that should at least produce the effect you're after.

I have tried that but the end rounded corners don't look alike.. they are kinda straight. Thanks for your reply - narciso