Using git, I understand branching and how to use master, develop, feature branches etc. in day to development for a website after it has gone live.

But for the initial big chunk of development that takes place (12 weeks or so) in order to get the sites first release build I'm not so sure of the best branching strategy.

Is it fine in this stage to commit and push directly on master? If not, what is the preferred strategy for git during the initial development phase before the first release.

As charles comments below, it depends what you want to do by default when cloning a repo

what is the preferred strategy for git during the initial development phase before the first release.

You can isolate that integration phase on its own branch, which is the result of the merge of one or several rama característica, in order to test all features together.

The first release will see:

Now in practice (and this is where I agree with Charles's https://www.youtube.com/watch?v=xB-eutXNUMXJtA&feature=youtu.be), Si todos the features you are developing will make it to first release, you podría develop everything on master, release it, put a tag 1.0.

But once the first release is done, I would still recommend isolate hot fixes in their own branch.

Again, depending on the default role you want master branch to have, you can develop directly in it.
Try only to avoid merging from master to other branch ("back merge").
If you have feature you have to back port in past release, develop them in their own branch before merging them to master and to other release branches.

As an example of a large project following that model (development on master, and branches for release), you can see the organization of gitlabhq. 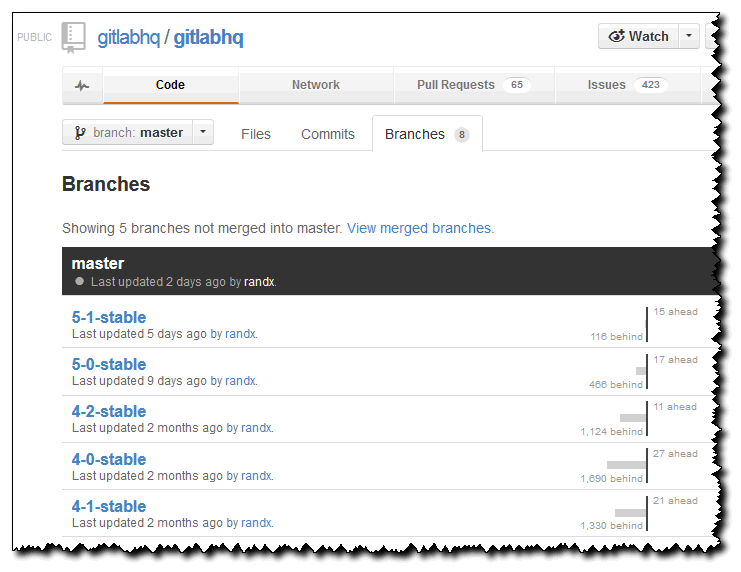 The idea is to only commit to master feature that you are seguro will make it to the next release.

Experimental features (that might or might not make it) should be isolated in their own branch (or in master, pero en un parche de clonado repo, and merged through pull requests).

The default branch that you want most people to work on most of the time should be the default one they get checked out on clone. This is the HEAD of the central repository, usually master. If you want a stable branch that trails master, this shoul be called something else or you should change HEAD to point to a branch with a different name. IMHO, of course. - CB Bailey

If I'm cloning, it's because I wan to develop; otherwise I'd just download a stable versioned tarball. Agree to disagree? - CB Bailey

@CharlesBailey No, I can agree to agree ;) I my shop, I have actually repos dedicated for development only, with master branch used precisely for that role (dev in progress). - VonC

The only time you should branch (by which I mean create a separate central named shared branch) is where you have some development objective for which you no quiero all of the changes which would normally go into the origin branch off which you are proposing to branch.

It sounds like all of the work you are doing is working towards your one goal - first release. There does not seem to be a good reason to have more than one branch at this stage.

+1 (I didn't see your answer while I was writing mine): simpler approach (which I mention in my answer). I am used to larger project ;) - VonC

My recommendation is that you actually do the same practice before and after the main go-live. I think that it is not a good idea to have different practices before and after.

I believe that practice should be to never develop in master, always use branches.

Create a branch and when you've finished with the work for a while and you feel it is in a fairly stable, working state, push it to master.

Branches are very cheap, quick and lightweight, look: checkout -b newbranch I just created one!

Note that this extensive use of branches differs from older version control system where a branch frequently meant you actually wanted to diverage from the main path and go in a different direction.

The one area that I would treat differently perhaps is the 'release' branch which I do agree is a good idea. Before your first release this doesn't exist. After the go-live this will be the branch that is collecting up features/fixes/chores ready for QA and release into master for production.

I agree, but Charle's comments to my own answer point to a different practice: what do you want to get when cloning by default a repo? If it is the latest developments, then it can make sense to see those commits done directly on master. That being said, +1 for quick short-lived feature branches :) - VonC

My favorite best practice is the one adviced by git-flow

and the corresponding tool

Curiosamente, git-flow can be viewed as a bit too sophisticated ;) That is why GitHub has its own workflow: scottchacon.com/2011/08/31/github-flow.html - VonC

I agree with @VonC but I'd probably go further. The "git flow" workflow is over-engineered for most situations, in my experience. It also seems to advocate only making release tags on master; but where does a 1.x hotfix get tagged if 2.0 already exists? - CB Bailey

@VonC The GitHub flow is certainly an interesting and relevant alternative. But it seems to me that it builds on the premise that you release every time you merge to master. In my experience that is too simplistic for most enterprise shops. - klas mellbourn

@KlasMellbourn I don't disagree with the premise you mention: this is very much tailored to GitHub habit of releasing as often as possible. - VonC

@CharlesBailey Bit of a two-pronged critique there. First you think it is over-engineered and then you mention that you miss a very advanced feature :) Actually I think you pose an interesting question, I don't know the "purist" answer to how you should handle that. I guess you could put the release tag on the hotfix branch, but that would create a permanent release branch beside the master. - klas mellbourn

Usually, when we talk about git workflows, we assume that we are in a stable stage. By this, I mean that we are already into a few weeks of development, and adding new stuff or making changes is usual day-to-day life.

But I think that the workflow actually evoluciona with the age of the code.

For example, when you first create a project, you will not bother about creating branches. It does not make sense to think about git that much, when you have not even started coding. This is kind of experimental phase. Everything you write is probably trash.

After a few days of development, your project starts to take shape, and you don't want to break the stable parts of it. And you also want to collaborate with your team members. So you want to create branches for new features. But quickly merge a ellos master too, since the overall codebase is still small, and manageable.

Once the code is too big to be manageable, then you actually talk about git workflows to manage it. And there are many workflows mentioned all over the place.

So to answer your question, if your codebase is small, focus on making the product right now, rather than managing the code.